Todays blog post is all about what’s keeping me busy. Well, isn’t that incredible boring if you’re home all day you might ask? Of course sometimes it is, but most of the time it’s actually more exciting than you might expect. Though loving food, both preparing it and eating it, is a great help in that, but that’s not the only thing that keeps my busy. So, read on and find out I guess.

This morning I started with a bowl of oatmeal. I didn’t feel like going to the shed for an apple, so I decided to experiment a bit. Chocolate oatmeal it was. Just a simple porridge of half a cup of oats, half a cup of soy milk, one cup of water, sugar and cacao. I topped it of with chocolate  chips, a banana (because honestly to me a breakfast without fruit isn’t a breakfast) and some soymilk, for extra creaminess. 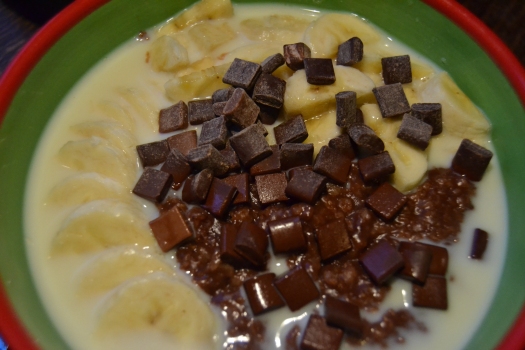 To be honest I didn’t really like it. The flavour was fine (it’s chocolate, you can’t go wrong there), but the texture just wasn’t for me. I guess I just don’t like oatmeal without some fruit in it to break up the texture. If you do like plain oatmeal you should probably really give this a try though.

I have been having breakfast at my desk all week, so ever since I decided I needed a desk on monday morning and right away transformed our dining table into a workspace. Before it mostly functioned as a clutter collector anyway, so win-win. This decision has really given me a new habit rush. I’ve been decluttering and even cleaning since. Those things become so hard when I’m in a rut, but on a new habit rush they almost seem to do themselves. This morning our kitchen and pantry were up. Kitchen and pantry? Yes, we have a fairly small kitchen, but a surprising amount of storage space in the rest of the house, so our pantry continues in the cupboard under the stairs, our dishes are mostly in a cabinet in the living room and a lot of kitchen tools are in a cupboard that’s technically in the living room, but also has a hatch for one board in the kitchen. Other than that we have a small cupboard and several boards in the kitchen, which are all stuffed. I should really give you a tour of my kitchen and pantry with pictures some day. But, yeah, decluttering, that’s what I’ve been doing today. I threw out an entire garbage bag of stuff, mostly food that had gone bad, broken containers and crappy tools that are never used, and yes, even an empty package here and there. Around 11 took a quick break to buy some bread and pasta.

Around noon my new hard drive came in. My old one turned out to be a lot less compatible to my macbook as I thought. I started decluttering my old hard drive earlier this week (yes, more decluttering) and just as I was almost done I noticed no space had freed up at all, despite how much I had thrown away. I tried to format it, but I simply couldn’t. After trying a bunch of things I realized it was simply in the wrong format. I decided to let my partner try it with his laptop (all my files were on my laptop by now), if I could still use it I could continue my backup, if not I would just give it to him. It didn’t. After quite a few incidents with my laptop where I lost my files not having a backup just wasn’t an option, so I bought a new one, this time making sure it was actually compatible with mac. So I made a new back up as soon as it came in.

As my laptop was working by itself I continued in the kitchen, which was done around 1, time for lunch. Todays lunch was a simple avocado pasta. Spaghetinni this time. 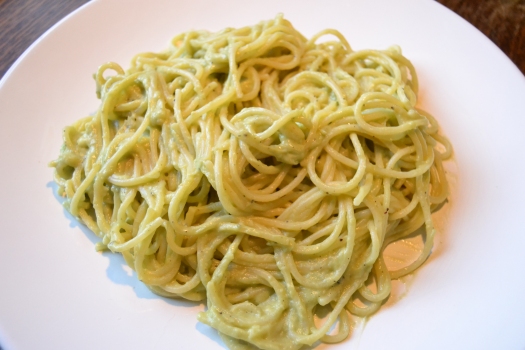 Usually I just buy cheap ass spaghetti, but this entire brand was on sale today, so I treated myself to something a bit nicer. I make my avocado sauce with 1 – 1,5 avocado, depending on the size, 2 cloves of garlic, salt, pepper, heaps or nutritional yeast and a splash of unsweetened almond milk. Many people add oil to this, but I try to eat as little refined fats as possible, even though I have a hard time staying away from fried foods (mostly pan fried).

In the afternoon I spent most of my time watching youtube. This weeks obsession is Jenny Mustard. I don’t really care for her fashion stuff, but that’s simply because I don’t care about fashion. But her video’s on minimalism really suit my current need for decluttering and her simple seasonal recipes really suit my need for something warming without too much effort. If you don’t know her I definitely recommend checking her out, both on youtube and her blog (www.jennymustard.com).

Then a little gift (or rather pretty big gift) from my partner arrived in the mail: a rice cooker. I’ve wanted one for quite a while now, to make healthy cooking a bit easier. 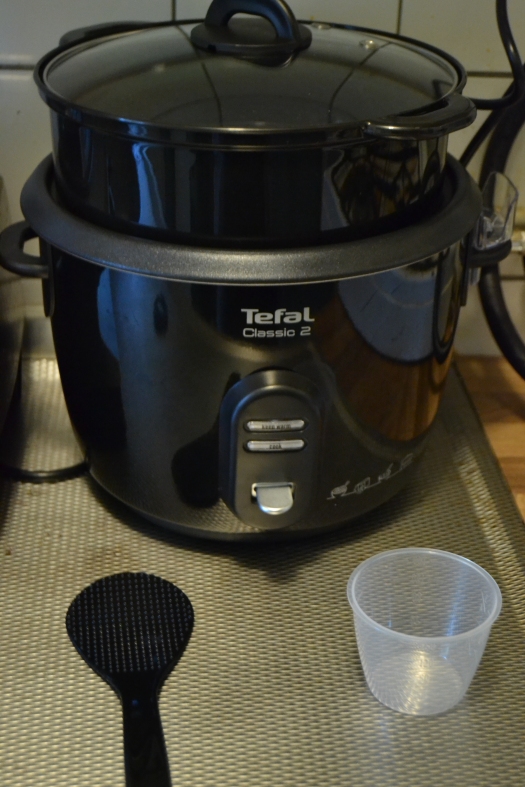 Please ignore my very ugly kitchen (now you know why I usually don’t take pictures there), but look it even has a steamer compartment, so now I can steam rice and veggies at the same time. And now I can cook big Asian meals (Japanese or Indian for example) consisting of many dishes without running out of stovetop space. I’m definitely going to try it out for tonights dinner, which will be burritos filled with rice, sweet potato, sweetcorn, kidney beans, fresh salsa and guac and fried mushrooms. Let’s see if I can make this oil free.

I hope you enjoyed todays update. Do you want more pictures? Do you like my rambling or is it to much? Let me know. See you next time.